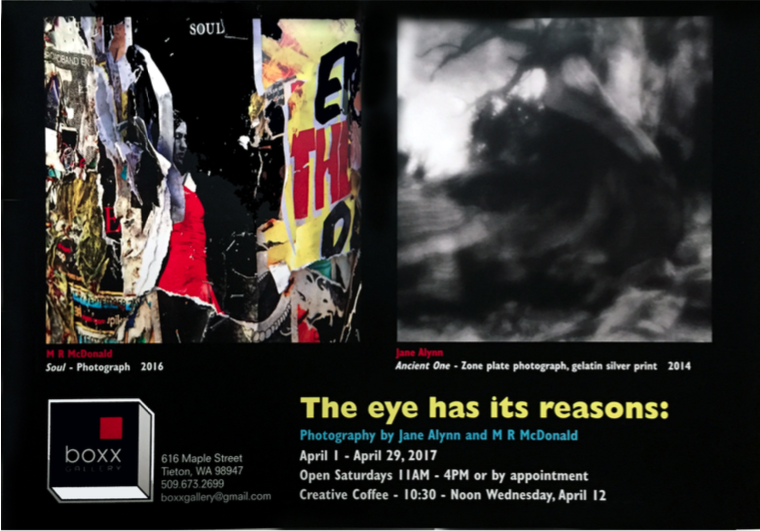 Tieton, WA – April 1, 2017 – Boxx Gallery is pleased to present The eye has its reasons…, a two-person exhibition featuring photographic works by Jane Alynn and M R McDonald, two artists who will make you see the world differently. They share an affinity for visual perception and a shift from the literal. But both use the medium differently.

Jane Alynn’s black and white film-based photographs are reminiscent of Pictorialism’s soft-focus, its diffuse and ethereal light and shadow. These lensless images tempt the imagination to see beyond the literal. M R McDonald photographs the poster scene he finds in Seattle. In his “found art,” as he calls it, the literal gets lost in the rips, tears, and unfinished imagery.

Jane Alynn lives in Anacortes, WA, but has family roots in Tieton. Among her awards, she was selected in 2014 as a finalist in Photolucida’s Critical Mass, and received in 2013 a Women in Photography Award. Also a poet, she delights in the intersection of these sister arts.

M R McDonald was born in Yakima. His photographs have shown throughout Washington. In addition to photography, he has exhibited his non-representational paintings. He has been an artist at Gallery 110 in Seattle, since 2015.

The Gifts of Harvest